With charm to rival Paris and a night-life level with vibrant Berlin, this South American enigma takes on a personality entirely individual.

See a swirl of flamenco; learn the fiery tango, as passionate perhaps as the people you’ll dance away the night with. Want to be filled up? Be chilled by arty Palermo, who’s tree-lined avenues and matchless quirk you somehow feel. Stop at Don Julio’s, the quarters best Argentinian joint – you’re full with both sparkle and steak.

Meander antique markets, find class alike to the city. Get excitedly spooked in grandest of tomb cemeteries or hear the story of Buenos Aires on the Caminito tour, where ultra bright shipping containers tell an Argentine tale. Savor an empanada whilst feeling European, as you people watch with a coffee. Among such architectural character and Latino feel though, you’ll know… It’s Buenos Aires, just like nowhere else.

Liverpool and its atmosphere is traditional in the old fashioned sense which we attach to community, a good sense of humour and CHRISTMAS. Visit the city this festive season and you’ll sense that Liverpool holds that unique connection with the past, which defies to part way with the things which really and always matter. The innovative though is also newly welcomed here, in a city where what seems to be the creativity of the future, coexists with the values we all hold so dear. This wonderful make-up you’ll see, is only possible through the people, whose real love for their city ensures that they’d have it no other way.

It is this time of year however, which bring the cities attributes furthest from their shell; the cultural capital, whose people’s light hearted laugh can be heard from a cosy tea shop, as the frosted door jingles open closed on Bold street – the cultural quarters hot spot. Fancy a drink? Be sure to find an evening suited to your taste. Enjoy a Christmas cocktail in candlelit Santa Chupitos, the tiny bar with intimate touch. Dance to electronica till’ dawn in a pop up warehouse venue, or feel festive with friends in the Philharmonic pub, lavishly Victorian.

Go to a museum, the old and shiny buildings on the cobbled, iconic docks host home to tons of them! Hit the shops, be served with a smile. Go for a meal, choose from a range of independents that you’ll want to re-visit. Wrap up and walk the Georgian quarter, originally beautiful, or pop to the Cavern – we nearly got there without mentioning the Beatles!

None of the character inherent in all of these places though, bear any significance without the charm of Liverpool’s people, who herald the cities warming personality.

As the overwhelming theme here seems to be “the personal”: go to a vintage fair at Leaf on Bold street, ask a lady where the cute balloon came from in the corner? You won’t be allowed home without it… Honestly.

It’s this type of heart which will win you individually to the city. It’s spirit is one inherent here all year round, but which seems overwhelmingly just like the spirit of Christmas. ☃

Where you’ll see your toes glistening against the pure white sand below the equally sparkling and most clear sea, as you stand on the shores of this secluded island. ‘Nothing else matters right now’ as you meander the quiet toy town, far removed from the bustle of your other life. Find yourself laughing easily with mellow locals around an evening BBQ or take a boat trip to the blue lagoon, where you’ll snorkel your way to the brightest tropical fish. Spy a wild monkey on your hike to Lopez Mendez; the private beach accessible only by foot, no rumble from the taxi boat engine can be heard among the quiet few who have sought out such refined relaxation. Realise that you are only 40 minutes from poles apart RIO DE JANEIRO – go back to the wild? A fine choice to contemplate… Why not stay here a while and look around? 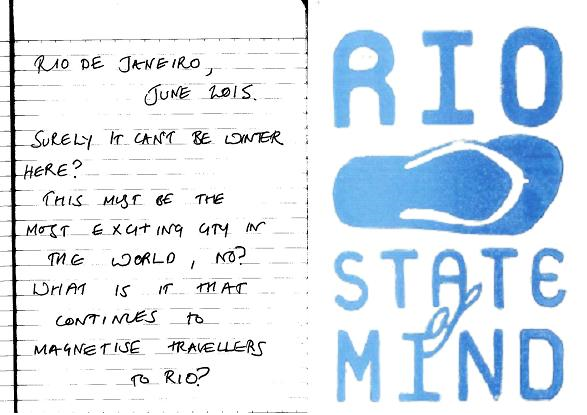 Is it the non-stop flow of Caipirinha’s? A sip of the exotic consumed along the alluring white sand shores of Ipanema and Copacabana all the way up to Lapa, the avid nightlife district like no other. Maybe it’s the glamour that the cityscape seems to reflect; the 70s hotels – too cool to be restored, the glimmer of the rustic beach parasol just short of the horizon, the low hum of samba that you catch from an unknown, backstreet, popular bar with a beaded curtain for a door an old rotating fan on the ceiling, as you take in the most exquisite view from the magnificent Christo. Authenticity beats modernity, you’ll feel. Or, is it the carioca’s who put you in that certain “RIO” state of mind? The laid back locals who appeal to your go with the flow side. 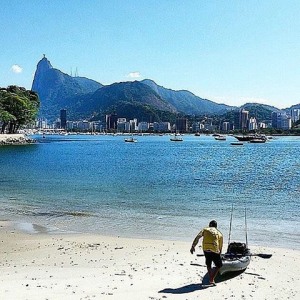 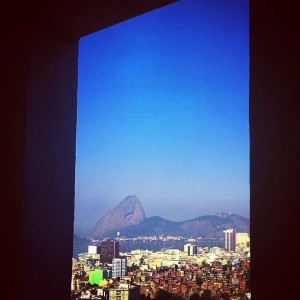 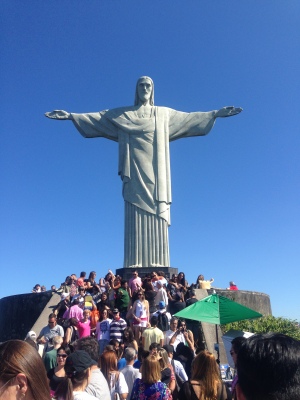 Perhaps though… the reason that the tourist has come to love Rio, is the hunger felt by all, visitor and carioca, for social change in this supposed paradise. One in five residents dwell within the favellas beneath the poverty line. One trip to Rochina, the city’s largest slum (pictured below) and you will see that not nearly enough is being done to prevent many of its issues. Is it the equal mixture of beauty and tragedy which leaves the traveler wanting more? Both from the city and the authorities. Christo himself is asking the Brazilian government to open up their arms. 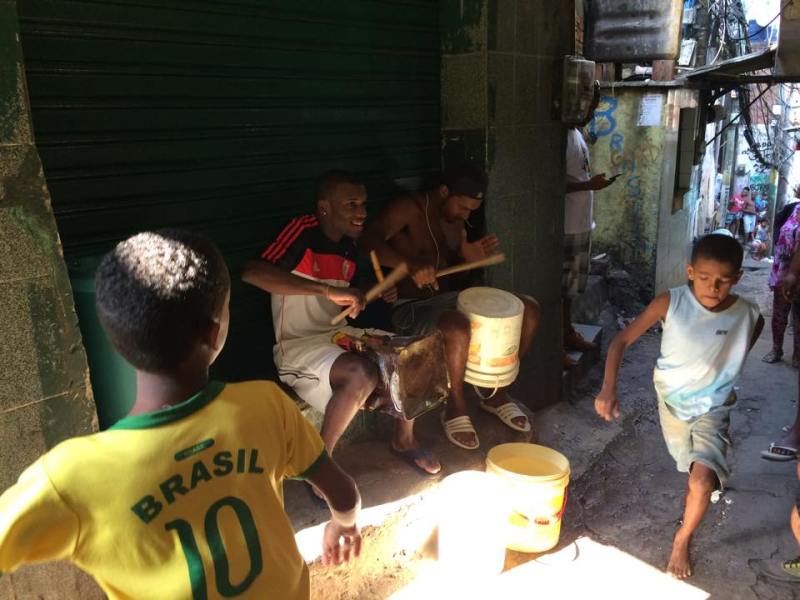 If not for your love of football then for the atmosphere. Here, at the worlds largest stadium, the entrance is located through a windy footpath which must have been designed to build the excitement. As you tread, your heart beat rises with the wild beat of the samba drum, the shriek of crazy fans and the wave of their bright flags. The Brazilian’s passion for their national sport would make the least interested football-goer fascinated upon joining the roaring crowd. It is warming to see that all walks of life are so thrilled and united by the game; you simply cannot help but join in!

The feeling up on Sugarloaf is one of complete serenity felt by every onlooker. This is the view that somehow, amidst such a vibrant city, could quell a naughty monkey with its true beauty. The deep wash of blue surrounding the land becomes lighter as the sun sets downwards,  pleasing every reflection with sparkle. The sense of magic heightens as the lights begin to fliker on; from the bottom of Rochina up to the glowing Christ the Redeemer, the city’s other wonder of the world. It is certainly a feeling of unreality as you spy over the place that you have undoubtedly come to love.

Dance the samba whilst listening to a live Brazilian band or join a street party where Caipirinha is on tap. Lapa; where locals welcome you with familiar delight and tantalize you with their Foho skills – the dance which only Brazilians seem to be able to pull off. The endless beat of the latino drum, bright graffiti and constant wave of people do add to the slightly nerving feeling which the travel books warn you about, but isn’t that all part of the fun? Nightlife in Lapa is intoxiating, go with it!

Nightlife in Berlin is like the atmosphere of the city itself: invigorating yet incredibly lax.  Locals prefer to boogie in their trainers than smarts, from late at night to whenever they feel like it the next day.

If you’re after crazy dark techno, no rules and extravagance, head straight to the infamous Berghain/ Panorama Bar (pictured right). The gratified and slightly daunting forefront of this huge old industrial factory reflects the liberal aura within its walls. Once over the threshold, it is easy to feel carried away by the club’s free attitude; surrounded by a crowd of care free characters, with strictly no photographs allowed and no (supposedly deliberately) mirrors to be seen, you can simply let go and enjoy the mad music.

Whilst Berghain offers an “exclusive” scene to those who enter, some feel that the strict and scrutinizing door policy whereby you are sized up and given a “yes” or “no” verdict is a tad pretentious and pretty demeaning. Skip this hassle by searching out Paloma Bar, hidden above Kaiser’s supermarket in central Kreuzberg, West Berlin. It may seem more “exclusive” to receive a warm welcome through a disguised door after taking the gritty stairs, tucked just that little bit away from the view of the street and the tourist trail.

For a fun middle ground between the hedonistic Berghain and chilled Paloma, Chalet also in stylish Kreuzberg renders the perfect vibe. The fairy lit garden complete with a pond and log fire lays the foundations for the party inside. With quirky flare, the plush seating and odd grand piano add to the feel that you’ve just arrived at a thriving house party. 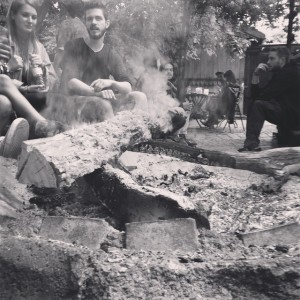